Tech-Air® 10 can be worn under any Alpinestars Tech-Air® Ready or Tech-Air® Compatible leather suits, or any third-party leather suit with 4 cm of space around the circumference of the rider’s chest and 2 cm of room around the circumference of the rider’s hips. The additional space for the chest and hips is necessary to be able to accommodate the inflation of the airbag, in the event of a crash.

• Designed to protect a motorcycle rider’s shoulders, chest, full back and hips, Tech
- Air® 10 provides the most comprehensive coverage of any airbag currently available.
• The state-of-the-art, wearable Tech-Air® 10 Airbag System comes with an active electronic System that features 12 sensors (3 triaxial accelerometers plus 1 triaxial gyroscope) and a crash detection algorithm that leverages AI to accurately monitor when to deploy the airbag in the event of a crash.
• The impact absorption while wearing the airbag results in a decrease of the impact force by up to 95% compared to a passive protector. When deployed, the Tech-Air® 10 Airbag System offers the same protection as that provided by 18 back protectors.
• The Tech-Air® 10 has CE certification Level 2 for both the chest and back.
• Upon the detection of a crash situation, a protective airbag is deployed, providing unrivaled protection to the rider with a maximum inflation time of 40ms.
• The Tech-Air® 10 Airbag System provides an even greater level of comprehensive coverage due to the additional protection of the riders’ hips and requires 2 argon gas inflators to fill the entire volume of the larger airbag when it is deployed in a crash situation. As such, Tech-Air® 10 does not have the dual charge concept like that of the Tech-Air® Race System.

• There is a dedicated area on the System’s internal belt which serves as the charging base for the remote wireless LED display. A fully charged LED Display operates for at least 20 hours.
• The System comes equipped with a USB charger and a magnetic Type C USB Cable that allows for quick, easy and convenient recharging.
• The Tech-Air® 10 System features an airbag that is certified for up to three inflations. However, after each deployment, when the System is received for service, the authorized Alpinestars Tech-Air® Service Centre will perform an inflation test on the airbag to check if the airbag has been damaged during the deployment. If the inflation test is passed, confirming that the airbag was not damaged during the deployment, the service will involve only the replacement of the gas inflators. If the inflation test is not passed, it means that the airbag was damaged during the deployment, and the System will undergo the full service that will involve the replacement of the gas inflators and the airbag. At the third deployment, the System will mandatorily undergo a full service, with the gas inflators and airbag being replaced.

• A remote wireless LED display indicates the airbag’s operational status.
• The integrated, certified lithium-ion battery has a battery life of 24 hours of riding time.
• Developed from years of research with the world’s top MotoGP riders, and Alpinestars’ customers, data from millions of kilometers and thousands of crashes have been analyzed to continuously improve the intelligent crash detection algorithm.
• The Tech-Air® 10 System is extremely easy to use; just zip up the front and close the belt to activate the Airbag System, and you’re ready to ride. The internal belt automatically activates the System once it is fastened and secured.
• In Race Mode, the Tech-Air® 10 System is active only while riding above approximately 60km/h (37mph) for at least 10 seconds. Before this activation or when the rider’s speed drops steadily below such speed for at least 10 seconds, the System deactivates. This is the standard behavior of the Tech-Air® 10 Airbag System when in Race Mode, as it is normal to have fast stop and go riding situations where the rider doesn’t want to switch off the airbag. In such conditions, it is safer for the rider to have the airbag automatically deactivated by the System to avoid undesired deployments of the airbag.
• The remote wireless LED display can be moved onto the rider’s arm to easily check the System’s status. The LED display can also be attached to the bike, depending on the rider’s preference.
• The Tech-Air® 10 System, requires approximately 4 hours to recharge a discharged battery with the supplied USB Charger. A fully charged battery will provide approximately 24 hours of use. If limited time is available, charging the battery for approximately 1 hour will provide approximately 6 hours of use.
• The airbag itself is breathable, designed with air channels and a perforated back zone that provide airflow to improve rider comfort.
• The Tech-Air® 10 System may be quickly attached to the Alpinestars’ Tech-Air® 10 System Base Layer via easy-to-use lateral zips; this allows riders to substitute the base layer between riding sessions if desired.
• The Tech-Air® 10 System Base Layer is hand washable.
• The total weight of the Tech-Air® 10 (System and base layer) is 2.390 g for a size medium.
• Tech-Air® 10 is designed for track and road use and can be used with both the RACE and the STREET Riding Modes which have specific AI crash detection algorithms. The RACE Riding mode must only be used for riding on closed racetracks and should not be used for any other types of riding.
• Bluetooth connectivity to a Tech-Air® App provides riders with the Airbag System’s operational status, battery status and MyRide trip information.
• Via the Tech-Air® App, riders can also update the System’s firmware when new crash-detection algorithms are released.

Write Your Own Review

You may also be interested in the following product(s) 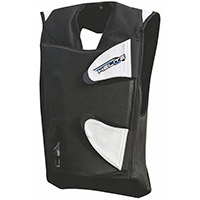